A review by Kemp et al (2012) revealed that many of the percieved impacts of beaver dams on fish are based on conjecture and heresay. This is not to suggest that there are never negative impacts on fish, just that perceptions amongst fish biolgists and managers have strong bias.

Beaver dams can act as a barrier (typically temporarily or seasonally) to upstream and downstream movement of fish. Too often, this is assumed to always be detrimental. However, for many native fish that co-evolved with beaver dam activity in the systems, beaver dams are passable and not a problem. Moreover, the fact that beaver dams tend to lead to the creation of both more, and more diverse aquatic habitat tends to offset negative impacts for many native fish. For many fish who pass upstream of beaver dams with ease, this tends to correspond with when they spawn and that migration tied to higher flows. 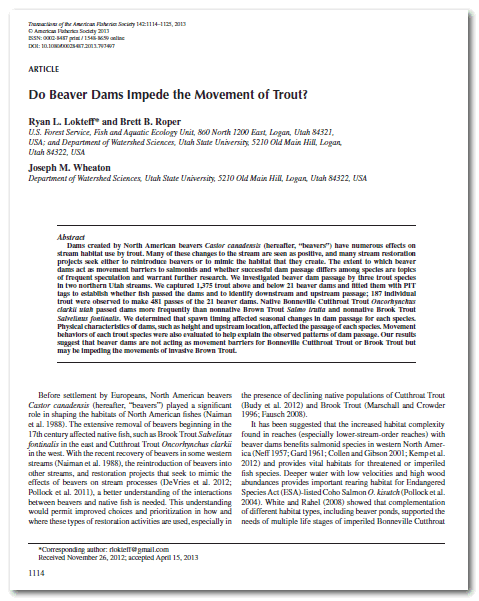 Studies on Fish Passage at BDAs

Fish often use the mattresses in front of a dam to make their way up and over a dam:

Fish do not always make it successfully over a dam, but under different flow conditions that story may differ. Here, a minor breach in a dam presents some challenges for this fish:

If you’ve ever seen this sticker, the video below will give some creedence to that. Jumping is probably not the most common way most fish make it over beaver dams (using a mattress or overflow channels is likely more common). Neat footage all the same:

Many misinterpret any struggle or failed passage over beaver dams as necessarily a bad thing. However, disregarding that interpretation, the video below shows some interesting footage.

Can’t believe I missed #WorldFishMigrationDay, one of my favorite holidays. Appropriately, I was out fishing.

To belatedly celebrate, here’s a quick thread about migratory fish and — of course — #beavers. pic.twitter.com/aZSjuJXebq

Special Case of Oregon Department of Fish and Wildlife 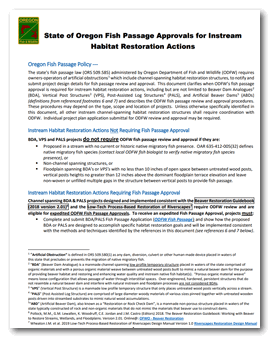 Oregon has a fish passage law (ORS 509.585), which initially caused some concern for how low-tech PBR projectswere permitted in fish-bearing streams. In 2020, ODFW progressively updated their fish passage policy to explicitly address and allow a pathway for LTPBR structures to proceed if they meet certain guidelines (including following the design principles in the LTPBR manual). 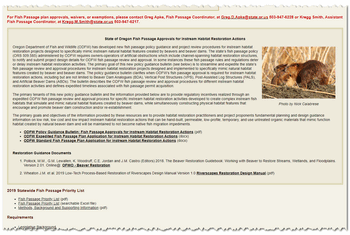 Back to Science
Case for LTPBR