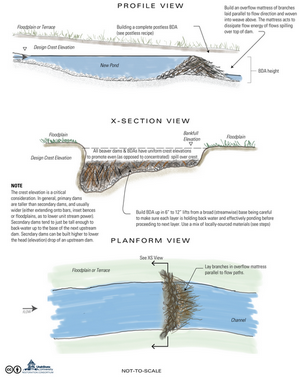 There are a large number of ways to construct beaver dam analogues. We are partial to those that take their inspiration most directly from beaver. In so many of the places that beaver can build dams, they do so successfully without any posts driven vertically into the streambed. Our most common reciepe for BDAs we recommend is the postless BDA shown at right (Figure 4.32 ). If you are convinced posts are necessary or helpful for providing some temporary stability, we recommend building a postless BDA and installing the posts after the fact (e.g. Figure 4.34 ).

Some of the original and experimental BDA designs are described in Appendix C of Chapter 4. We do not typically recommend these early designs and recipes, as variations of the above designs tend to build more quickly and work better. However, such recipes have successfully promoted beaver dam activity in a large number cases and we provide them in Appendix E for your consideration. We encourage practitioners to expriment with different recipes and ingredients, but to adhere to the LTPBR Restoration Principles in doing so. Chapter 4 discusses BDAs in more detail, whereas Module 5E the Construction of BDAs are discussed.

In Module 2F we talk about the many confusing uses of the term BDA and a bunch of related terms. Just because someone calls something a BDA, doesn’t mean it is what we define as a BDA in Wheaton et al. (2019) as the LTPBR Standards of Practice. Therein, a BDA is a temporary structure that is designed to promote the process of beaver dam activity by beaver. BDAs can sometimes be used to mimic beaver dam activity, but that is typically for a short period of time (e.g. to release translocated beaver into safe ponds, or to foster expansion of riparian vegetation). Like real beaver dams, BDAs typically require maintenance (better by beaver) if pond levels are to be maintained. Also like real beaver dams, BDAs come and go, and with those dynamics a complex and changing mosaic of habitat is left behind.


Point in Module 2F lecture where we discuss confusing terminology around BDAs. 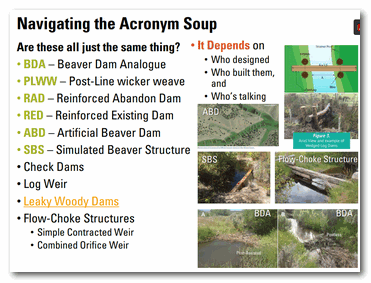 The Science Behind LTPBR- Slides

Back to Design Manual Home Return to PBR Resources